Peppermint Rainbow - A Look Back

Ask the Research Doctor a question.

Forum rules
How do you ask the Research Doctor a question?

Your question is submitted annonymously unless you include your name.

Click "Submit" and then check back to find Dr. Wimmer's answer to your question.

If you wish to have a private answer to a question (not posted in the forum), please include your email address. Dr. Wimmer will send your answer directly to you.

Dr. Wimmer maintains an Archive of questions from the forum. Go to http://www.rogerwimmer.com and click on "The Research Doctor Archive" link.
Post Reply
1 post • Page 1 of 1

Peppermint Rainbow - A Look Back

Doc: In one of your other sources, you wrote about the significance of music to people and how music from a person’s “formative” years tends to be liked the most throughout a person’s life. I think I have that correct. Would you post that discussion here because I would like a few of my music friends to see it? Thanks in advance. - Anonymous

Anon: I have written many things on this topic, but you may be referring to the article I wrote about how people from one generation tend to make fun of (laugh at? criticize?) the music from other generations. It’s a common reaction that virtually anyone in the radio or music industries has seen many times. Young people criticize the music older people listen to and vice versa. That’s just the way it goes.

It is also common for each generation to ask another generation (younger or older) the same question about music from that time period, and that is: “How can you listen to that stuff?” (Or some other descriptive term in place of “stuff.”) It is common to hear each generation describe “their music” as the best, and almost all other music as less than that. The reaction is something I have learned to expect from virtually everyone in any discussion about music from different eras.

In my other article, I provided a video to demonstrate how different generations react differently to the same song, and included a link for a video from 1969 by a group called the Peppermint Rainbow. When young people watch the video, they usually laugh and say, “How could you have liked that stuff?” along with other critical comments about the performers’ costumes, hairstyles, and more. When older people watch the video, they usually say something like, “I remember that” or “That was a great time” or some other positive comment. The video is a “flashback” to the older people’s formative years and it elicits many reactions to a variety of things from that time.

All music is powerful in one way or another, and it’s fun to watch how different people react to different types of music. Regardless of whether you like the music or not, most music videos are great educational tools because they are essentially short history lessons of the time when the videos were made. Watching almost any video provides information about language, clothing styles, relationships, lifestyles, the economy, and host of other things about that time period.

Now, with all that in mind, watch the video example I provide. As I mentioned, it’s from 1969 and it perfectly represents the time period. What is your reaction to it? What does it tell you about the time period? I can almost guarantee that most older people will watch this and be flooded with a bunch of great memories (some younger people may also like it too). So . . . click here and experience a little history lesson. (Note: The video isn't great, but the audio is the best I could find.)

The two women in the group are sisters - Bonnie Lamdin (at left) and Pat Lamdin. I contacted Bonnie a few days ago and asked her about the video. She said, “I believe the video was from The King Family Show. It was a little strange because there was a lead-in created and a separate ending to allow them to "sing along.” We practiced just a time or two and went for it. TV back then was a lot more crude than it is today.”

I want to thank Bonnie for taking the time to help me. She is a very nice person and gave me permission to use her comments here. In addition, she sent me a few photos of herself at a recent impromptu singing performance at a charity event. Here is Bonnie in March 2012 . . . 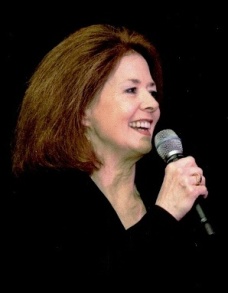 (Want to comment on this question? Click on the POSTREPLY button under the question.)
Roger Wimmer is owner of Wimmer Research and senior author of Mass Media Research: An Introduction, 10th Edition.
Top
Post Reply
1 post • Page 1 of 1